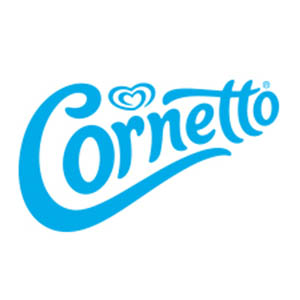 Enjoying a Cornetto is truly an experience. Consisting of a delicious, crispy-baked wafer, coated inside from top to bottom with a chocolate-flavour layer, combined with a delicious ice cream. For over 50 years we’ve been perfecting our Cornetto recipe to make the taste of every Cornetto ice cream even better than the last, taking your taste buds on a delicious journey – from the tantalising topping, through the smooth ice cream down to the crispy wafer cone.

Cornetto is continuously bringing new flavours to the Cornetto range and its crisp wafer cone. For instance, in 2004 the brand launched a limited edition Love Potions range and a year later this was followed by Cornetto Mint. In 2006, Cornetto Caramel was introduced. From 2007 until 2008 more great tasting recipes were launched including the fabulous Cornetto Choco Disc. A cone filled with vanilla-flavour ice cream with a Dulce de Leche flavour centre, topped with a milk chocolate disc with cashew nuts. The following year this was complemented by the launch of Fruiti Disc followed by Cornetto Love ice creams.

In 2012, Cornetto ice cream cones latest edition was the fabulous Cornetto Enigma range, a taste adventure from top to bottom with no boring bits.

Here’s what you can enjoy locally…