M&Z p.l.c. has announced that its offer for the sale of 11,550,000 ordinary shares in the Company, as per a prospectus dated 25 January 2022, has been successfully completed and was over-subscribed. The ordinary shares in the Company, (the Sale Shares), are expected to be admitted to listing on the Official List of the Malta Stock Exchange on 11 March 2022 and trading is expected to commence on 14 March 2022.

Greta Camilleri, Managing Director at M&Z p.l.c., said, “As our Company embarks on this new chapter in its 100-year history, I would like to thank both the Authorised Intermediaries and investing public for their support and the confidence they have shown in M&Z. As a team, we are fully committed to making sure we do our utmost to continue to build M&Z as one of Malta’s leading importers and distributors of consumer products. I would also like to thank our advisors Rizzo, Farrugia & Co. (Stockbrokers) Ltd, Ganado Advocates and PricewaterhouseCoopers, for their support in this successful share offer.” 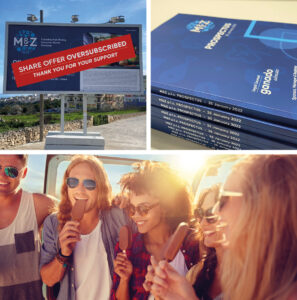 M&Z p.l.c.’s successful share offer coincides with another milestone for the company, namely its 100-year anniversary this year. The Company represents many leading global FMCG manufacturers and is responsible for the importation, marketing and distribution of a vast array of renowned brands. It operates in the categories of ambient, fresh, chilled and frozen foods, ice-cream, baby & kids care and home & personal care with brands such as Knorr, Magnum Ice-Cream, Flora Spread, Quorn, Ella’s Kitchen and Vaseline among others. Its distribution network reaches a wide customer base through various channels, including the traditional groceries and supermarkets as well as a direct-to-consumer route.