All you need to know about Quinoa

The word “quinoa” is pronounced “KEEN-wah”. It comes from the Spanish word, quinua. Quinoa is a grain crop that is grown for its edible seeds. Technically quinoa is not a cereal grain, but a pseudo-cereal. In other words, it is basically a seed, which is prepared and eaten similarly to other grains, such as wheat, oats, barley and rye, thus it can be grouped together with those foods. Quinoa health benefits are numerous.

Quinoa originated in the Andean region of Ecuador, Bolivia, Colombia and Peru, where it was successfully domesticated 3,000 to 4,000 years ago for human consumption, though archaeological evidence shows a non-domesticated association with pastoral herding some 5,200 to 7,000 years ago. Quinoa has been an important staple in the Andean cultures where the plant is indigenous but relatively obscure in the rest of the world. During the Spanish conquest of South America, the Spanish colonists scorned quinoa as ‘food for Indians’ and even suppressed its cultivation, due to its status within indigenous religious ceremonies.

Quinoa health benefits are becoming more widely known. Quinoa has become increasingly popular in the United States, Europe, China and Japan where the crop is not typically grown. Today, people appreciate quinoa for its nutritional value which, when compared to other cereals, is very good. In comparison to other cereals, quinoa is higher in fat content and can provide valuable amounts of heart-healthy fats. About 25% of quinoa’s fatty acids is monounsaturated fat, in the form of oleic acid, and about 8% come in the form of ALA – the omega-3 fatty acid. Unlike most grains, quinoa is a source of complete, high quality protein. It is also a good source of dietary fibre, B vitamins, phosphorus, calcium, magnesium and iron.

Researchers have recently taken a close look at certain phytonutrients in quinoa, particularly two flavoniods – quercetin and kaempferol – are now known to be provided by quinoa in concentrated amounts. These plant molecules have an important role in quinoa health benefits and have been shown to have anti-inflammatory and antioxidant properties leading to chronic disease prevention. Quinoa is a perfect food to include on a gluten-free diet, since it lacks gluten. 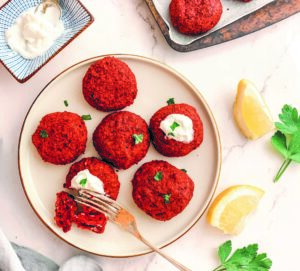 How to select, prepare and cook quinoa

Quinoa is generally available in pre-packaged containers, such as the ones provided by Tipiak. The most common type of quinoa you will find in shops has an off-white colour, but red and black quinoa are becoming more available as well as a tri-colour mixture, or mixed with other grains, such Tipiak Quinoa Gourmand – Quinoa & Bulgur Wheat.

Processing methods used in the commercial milling of quinoa usually remove most of the saponins found in the outer coat of the quinoa seeds. Because the quinoa saponins are largely responsible for its bitter taste, many people choose to rinse and rub the seeds after purchase to remove any bitter taste that may remain in the seeds. An effective method to do so is to place the quinoa seeds in a fine-meshed strainer and run cold water over the quinoa while gently rubbing the seeds together in your hands. After completing this process, you can taste a few seeds to determine if a bitter taste remains. If it does, simply continue this rinsing and rubbing process until you no longer taste a bitter residue. 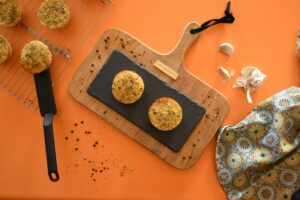 To cook the quinoa, add one part of the grain to two parts liquid in a saucepan. For additional flavour, add a clove of garlic or a sprig of rosemary. After the mixture is brought to a boil, reduce the heat to simmer. One cup of quinoa cooked by this method usually takes 15 minutes to prepare. When cooking is complete, you will notice that the grains have become translucent, and the white germ has partially detached itself, appearing like a white-spiraled tail. If you desire the quinoa to have a nuttier flavor, you can dry roast it before cooking; to dry roast, place it in a skillet over medium-low heat and stir constantly for five minutes. Tipiak quinoa – easy cooking offers yet another easy and convenient way of preparation as quinoa comes in pre-portioned bags (1 sachet contains 2 servings) which can be dipped in boiling water and it will be ready in 15 minutes. 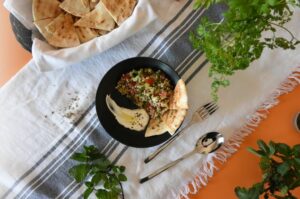 • Combine cooked chilled quinoa with your preferred beans, seeds, vegetables, fresh herbs and a drizzle of olive oil for a nutritious salad.
• Add nuts and fruits to cooked quinoa and serve as breakfast porridge.
• Add quinoa to your favourite vegetable soups.
• Cooked quinoa can be added to baked goods such as, savoury muffins.
• Layer with quinoa for a lasagne with a twist.
• Substitute rice for quinoa in recipes designed for rice, such as, rice pudding, stuffed peppers or arancini.
• Substitute half the amount of potatoes with quinoa for croquettes or patties.

How to store cooked quinoa

Leftover quinoa keeps well in an airtight container or bag, refrigerated, for 4 to 5 days or in the freezer for longer storage. Make sure it has cooled to room temperature before covering and chilling. To reheat, let the frozen quinoa defrost in the fridge overnight. You can also warm it in the microwave for about 1 minute or in a saucepan with 2 tablespoons of water. Once it’s thawed, you can use it in a number of recipes, or season it and eat it as a side dish.

The different types of couscous and their benefits

Kitchen cupboard essentials – What to always have in your pantry